Each book I write for the Hero Hearts Historical series will end with the word charmed. In this case, Magdalena Allen is a suffragette, and she’s headed to Bareglen Creek, Texas to work with the Sisters and teach children in an orphanage for two months.

Magdalena, originally from Philadelphia, is best friends with Claire Hawarden Clarke, the protagonist and matchmaker in the first book in the Hero Hearts 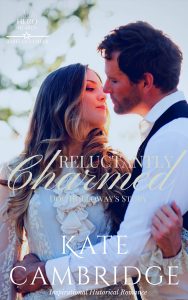 Bareglen Creek series, Lawfully Charmed. Claire is convinced that Magdalena is the perfect match for Doc Holloway (also a side character in Lawfully Charmed), but Claire has a lot of convincing to do for this match!

You see, Doc Holloway is very interested in Magdalena, but Magdalena plans to remain single for the rest of her life and has absolutely no intention of getting married — ever. (She has some solid reasons behind this, but you’ll have to read Reluctantly Charmed to find out what they are.)  : )

In this book, Magdalena is a suffragette, and thereby a heroine to every woman who appreciates the right to vote, own a business, and have the same rights as men–and she also has a hero’s heart.

Doc Holloway is also a hero, as is every physician in my opinion, and you’ll understand that better as you read the many ways that he serves his community and patients in the book.

Reluctantly Charmed is due to be released by May 11th. Don’t miss it!

Join the Choice Reader’s List and you’ll be the first to know the moment the book is released with special launch-day pricing.